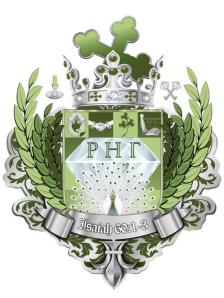 Fromerly known as Rho Eta Gamma Christian Leadership Sorority, the vision was conceived in the Spring of 2003 by Lavonya Knight on the campus of Hampton University in Hampton, Virginia. After days of prayer and fasting she began to do research on the origins and customs of Greek fraternal organizations and Christian Greek fraternal organizations. She inquired of three ladies to accept the challenge of helping her build this vision. Two of them accepted, and Lavonya Knight, LaToya Fletcher, and Sharica Perkins embarked on the task to birth Rho Eta Gamma.

In the latter part of the semester these three ladies began the journey of seeking God’s face for the order of this organization and the completion of the constitution. They met every week in Clark Hall to build a solid foundation. During the summer of 2004 the constitution was completed. Membership invitations were sent out and Rho Eta Gamma had it’s first organizational meeting in January of 2005. This time proved to be a time of testing and learning for Rho Eta Gamma, as we endured persecution from within and without. However, it was during this time that the vision was clarified and wonderful divine connections were developed for our organization. In 2008, Rho Eta Gamma Christian Leadership Sorority proceeded to make internal changes to better fulfill its mission and serve its members. These changes included changing the name of the organization to Rho Eta Gamma Women’s Leadership Society.

Called by God, we have arisen to the challenge to prepare strong leaders in the Body of Christ that have been called to set the standard that others will follow, and to transform our communities into beacons of hope. We gladly accept the call to build leaders that restore the image of the mothering anointing to the Church, and call God’s Beloved back into alignment with His order and presence, through the way we lead. Today the ladies of the founding line “Revolutionaries of Divine Truth and Order” continue to pursue the vision and watch as God does marvelous things in our midst.